15,000,000
Americans are effortlessly setting aside money for retirement thanks to the Save More Tomorrow program.

Save More Tomorrow is a behavioral intervention pioneered by Richard Thaler and I that is designed to make saving for retirement as easy and painless as possible. The intervention consists of three central components. First, we ask people to commit now to saving more in the future. This helps them avoid present bias. Second, planned increases in savings rates are linked to future pay raises. This minimizes the influence of loss aversion since take-home pay never decreases. Third, once employees are enrolled in the program, they remain in the program unless they opt-out. This makes good use of inertia. By taking our mental weaknesses into account, Save More Tomorrow helps us overcome them, allowing workers to make financial decisions closely aligned with their financial needs and long-term goals.

This “nudge” has gone on to achieve massive scale. In 2006, it was enshrined into law as part of the Pension Protection Act of 2006, which encouraged companies to adopt the core principles of the program. According to the latest calculations, it’s estimated that Save More Tomorrow has helped approximately fifteen million Americans significantly boost their savings rate. 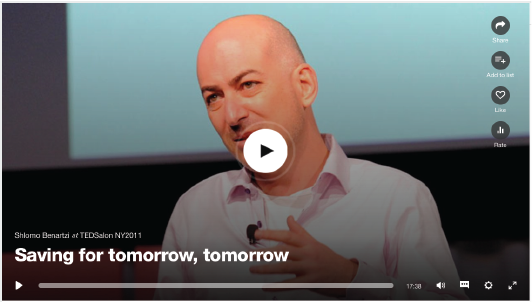